– Are you a Christian?

– What do you mean by that?

– Well, if you ask me whether I believe, accept, and follow what the different Christian churches teach, I am certainly not a Christian. But if you are asking me whether I internalize and follow the most fundamental principles of the Judeo-Christian civilization, then I am very much Christian.

– But that doesn’t mean to be a Christian, does it?

– Of course, it does. Why wouldn’t it? By prioritizing the ideals and principles of individualism, by naturally favoring the leadership of a humanized, reigning God-figure, by seeing the world in hierarchical structures, by preferring strongly paternalistic social systems, by identifying the divine with political institutions, by limiting human behavior to the categories of good and bad, praise and punishment, you are basically being a Christian. 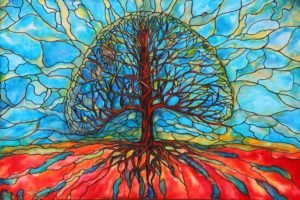 Tree of Life by Rae Chichilnitsky

– And how does this differ from being a religious Christian?

– Being a religious Christian means that you will not only be likely to live according to your religion’s social and philosophical constructs and follow its behavioral codes, but you will also willingly accept certain religious dogmas. However, if you are a culture-Christian, you may follow certain social, political, and ideological patterns, but you will not accept any of the religious tenets that created these social conventions in the first place.

– All of them, actually. Every religion is a major political force that formulates its societies’ most fundamental, unquestionable norms. Some people accept both the story and the norm, while others reject the story and keep the norm.

– Are there people who reject both the story and the norm?

– No one who lives in any culture or belongs to any civilization since all cultures and civilizations are different forms of social coexistence. Anyone who is part of a culture or a society is automatically a follower of that culture’s philosophical contracts.

– Is there any religion that is not a political force?

– If a religion were not a political institution, then it would not be a social religion but a silent, intimate, private philosophy. No, certainly, there is no religion without politics, as there are no social orders without religions. After all, as former kings justified their positions by claiming to be divinely anointed, all current rulers justify their positions by claiming their decisions to be motivated by their own societies’ religious principles.