Debate at the university about the existence of God. Two speakers argue against each other’s ideological conviction. (What a shame that any ideological conviction is a personal phenomenon that, due to its exclusively subjective-personal-individual nature – cannot be debated or argued.) And still, one speaker claims that there is no God. The other is sure that there is one. The anti-God speaker is an elegantly sober, level-headed man. The pro-God speaker has the aspect of a nervous, self-important little clown, who pompously and officiously runs up and down throughout the building’s walkways 30 minutes before the debate. He is exaggeratedly feminine. Not that I have anything against feminine men: the picture simply reminds me how often I saw this oppressed and self-oppressed, haughty yet deeply hurt, self-bleeding archetype in the Catholic Church. Such people do badly need a God-image behind which they can hide their misery, and with which they can try to cover their hopeless wretchedness. 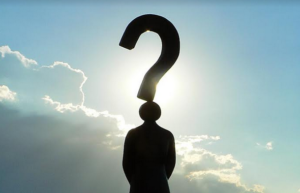 His counter-speaker’s self-confident appearance transmits a more stable emotional state, and a more trustworthy intellectual preparedness. Although he is a man filled with maturity and poise, he is hiding as well. He is trying to conceal his fear of the inexplicable and the intellectually incomprehensible, and covers his fear with science’s “objectivity” and “certainty,” with the seemingly irrefutable truth of empirical observation. He is certainly not letting his emotions take control over his appearance and personality. He is a self-controlled man of doctrines and rigorous studies, academic discipline and strictly observed institutional orderliness. But why is he hiding behind such walls of emotional-intellectual insensitivity? Why is he trying to get rid of all unexplainable human feelings and sentiments; of being a vulnerable, subjective, true human, more than a simple piece of rigid, infallible, overly cautious, academically impeccable machine?

Both men are convinced that either there is or there isn’t a God. Yet none exactly defines what God is.

I wonder whether they are debating the existence of a God independent of their own personal convictions and intellectual orientations, or they actually try to justify their strongly biased, personal, subjective emotional and intellectual approach to themselves and to the world.

In any case, the debate of the existence of God begins, or, should begin, with the clear definition of God itself. As long as we are not agreed on what we actually understand by the word God, we cannot go further, and discuss the existence of what we don’t even know what is. At the same time, if we define the meaning of the word God, we lose any reason to debate its existence: as soon as we have the exact definition of God, we also immediately know whether that thing, being, or phenomenon exists or not.

The problem with traditional God-debates is the utter lack of an exact definition of the word about which we are debating. Most people define God arbitrarily, based on one or other religion’s God-notion. But we should not forget that no religion has factual evidence concerning the description of its God (or their gods). Each religion uses a different, mostly ideologically based, strongly arbitrary God-description, therefore, unless any of them provides factual evidence of the authenticity of its own God-description, the claim of none of them can be genuine. Just as any historical religion, I also can set up a line of reasoning to claim that this chair under my bottom is God for this and that reason. Then I can claim that God – at least the God of my definition – is real and really exists. My claim will not differ from any other religion’s God-claim, except that my religion will be new, while other religions are as old as several millennia.

If I first can offer an exact definition of God, one that can be tested, checked, and verified by any person at any time at any particular place, regardless of their religion, age, historical time, education, intellect and such, then I can claim that God – the one that everybody similarly can experience and test – does exist. Except that I will not need to claim it because, as mentioned above – due to having God’s exact name, description, and definition – its existence will be self-evident for everyone.