Reading this college psychology textbook. In every single sentence, it pushes the idea that man is an animal. The book is abounding in sentences like “The key is the amount of time an animal, when free to do anything, engages in a specific behavior associated with the reinforcer. For instance, given freedom of choice, children more often eat ice cream than spinach.” Or: “nonhuman animals.”

For some reason, the book’s authors feel the urge to emphasize that man is just an animal, a human animal. Their whole book is based on such understanding. Is this book biased? Or is it trustworthy?

If we were only animals, as the book claims, then we wouldn’t show abilities unique to humans and impossible for animals. We wouldn’t show transcendent and trans-material capabilities at all. But we undoubtedly do. So are we really animals only? Isn’t there a little sparkle of “divinity” in us? Or there is, but it is ignored by the textbook because its authors cannot explain those trans-material human abilities? 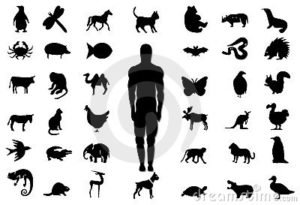 If we were mere animals, we wouldn’t be able to love. To commit suicide. To be altruistic and selfless. To do arts. To seek perfection. To engage in philosophy. All of these abilities are against nature and against matter. They serve something that is far beyond nature and matter. Love and altruism go against the logic of nature. Nature is not altruistic, not selfless, not loving. It cannot be because these qualities require a deliberate, conscious choice, and nature, animals, plants, and minerals do not have the (1) understanding, (2) deliberation, and (3) freedom of such choice. Suicide goes against nature whose one basic principle is the preservation of life and survival at all costs. Arts, philosophy, and the seeking of perfection go against nature in which no perfection exists, and the seeking of something that doesn’t exist leads to disappointment and dissatisfaction, two principles that cannot be found in nature. Nature’s interest and only principle is the finding of satisfaction, not the seeking of dissatisfaction. Our longing for arts, philosophy, beauty, and perfection are the seeking of an absolute, spiritual fulfillment that the material world cannot satisfy, therefore, the seeking of these transcendental qualities does necessarily cause a material dissatisfaction and disappointment. Man is full of principles that go against nature. That are nonsensical for nature and within nature.

My psychology textbook, however, does not want to realize this. It wants to make me understand, accept, internalize, and believe that I am an animal like this parrot, or that hedgehog. Indeed, I share certain qualities with them. But I also have some very different qualities that are not present in them, or anywhere in the natural world. Those qualities make me something else than a mere animal. Those qualities make me human. What being a human means is unclear. But that being a human does not entirely identify me with the natural world is unquestionable.

My textbook is biased. It lies. And it does so rather poorly.