Life as a process

The dramatic loss of tonality in the 20th-century music is not accidental. While tonality lends an understandable framework, a reliable context, belonging, and stability to music, the lack of it reflects a sense of instability, lostness, bewilderment, and incomprehensibility.

The sweet familiarity of tonality comes from man’s familiarity with perfection. The loss of such familiarity demonstrates man’s understanding that in the world there is no room for perfection. The 20th century lost connection with the idealism of perfection and realized that the world is indeed an evil and necessarily imperfect place. Consequently, man’s deepest self-expression, art, lost its idealism and began to announce the discovery of reality. The Church, or any other ideology, was no longer able to protect man from the bitter discovery of the truth, and with the sweet old times, gone were the sweet old forms, too. 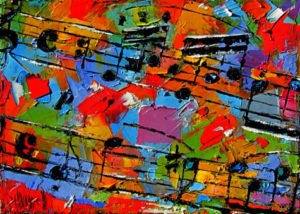 Indeed, we are speaking about a complete break with millennia of history and directions. New directions, new understandings, new identities, and new approaches emerged, and this atonality of ideology and identity is reflected in the atonality of music.

When the pretty, idealistic tonality of music is lost, what remains is a frameless atonality. This framelessness is called to express the idea that musical pieces are not neat, well-framed love-stories with clearly marked beginnings and ends, but, rather, music is a process of transformation without perfectly framed beginnings and ends. The former big picture is lost, and the new big picture is the state of uncertain picturelessness. As it turns out, alleged perfect forms of easily understandable tonal beginnings and ends are not more than a myth in which humanity blindly believed for thousands of years. Our spiritual evolution, however, awoke us from such sweet dreams, and we realized that life is not the story itself, but it is the way towards the story. What the story is might not be entirely clear, but that life is its confusing overture is more than evident. Contemporary music, therefore, is a process of becoming, a process of preparation, and a process of metamorphosis leading towards The Real Story of Perfection.

Interestingly, the last time that music embraced the idea that life is a process rather than the final product was in the Middle Ages. Gregorian chant, with its rhythmless free flow, without measures, barlines, and tightly dictated tempos, sensed something from the fact that life is indeed a continuum, an ongoing process of restless transformation. What still made plainchant sweet and soothing was its strong focus on transcendence. Unlike to modern music, to Gregorian chant, the light of divinity might have lent some mysterious shine and fabled perfection. It is not accidental that plainchant is living its renaissance today.