Money doesn’t make you a better person. Doesn’t it?

Until recently, I readily agreed with claims like these. I idealized noble poverty and humble austerity, and wanted to convince myself that money was a distracting and corrupting agent in life that had to be put strictly after moral rectitude, honesty, spirituality, and all emotional and ethical respects of human existence. I charmingly ignored that without money (most precisely, without what only money can achieve), human existence has no moral rectitude, honesty, spirituality, or any other emotional and ethical aspect. 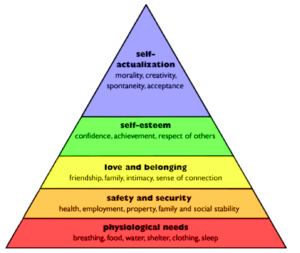 There are certain basic needs that every human being requires in order to function properly. Abraham Maslow, American psychologist, set up a hierarchy of needs with the more elemental needs at the bottom. He placed

(1) physiological needs as the most fundamental of all, followed by

For a long time, I had no money at all. Back then, I used to think and behave very differently from how I think and behave today. My life and self were not an elegant phenomenon. I lived from day to day, my major concerns being how to survive, and how to pay bills. I had no mind for the finest nuances and minutiae of human existence. I had no mind for questions like honesty, moral integrity, or human delicacy. I was not thinking about how to become a better person, or how to find the most subtle spiritual meaning of my existence. All I was thinking about was how to survive the day, the week, the month. All I was thinking about was how to survive in a cold, egoistic, and impersonal world that doesn’t care about you. And all I had a mind for was assuring a shelter, being fed, and kept warm and dry. That was my only focus, and that was my life’s only priority.

Then came my safety. Once I fed myself, and didn’t starve to death, I had to make sure that my physical safety was guaranteed; that no one attacked me, and no illness threatened my life, so that I could keep fighting for a better future.

Only then could I move to the next step: being loved. You cannot love someone who, like a wild animal, is starving, or is being attacked. You cannot love someone like that, because that person is unable to receive and perceive your love. That person needs bread and water, shelter and safety first, and only then can they deal with being loved, or loving someone else. The lack of the most basic human needs blocks our ability to love, because deprives us of our most basic infrastructure to be humans at all. Once we are fed and safe, dry and warm, we step up onto the next level of existence, and become humans. We are ready behave like humans, and deal with human concerns. But while we are cold and wet, vulnerably starving and roaming without a shelter, we are animals. We fall down and switch back into our animal self, into the lowest, material levels of existence, and prioritize the needs of the body. The needs of matter. In that state, there is no room for spirit, soul, ethics, or emotions.

I would say that the dividing line, therefore, between animal and human, is between the second and third level of Maslow’s pyramid. At the bottom of the pyramid, we focus on the roughest aspects of life: base survival. Even if formerly we were sophisticated humans, falling back to this stage, our priorities and system of values change, and we turn into simple animals considering their chances of raw survival. Once fed and safe, we can focus on the more human aspects of our individual and collective (social) existence. We can start giving and receiving love. Once loved and loving, we have a chance to start thinking about our self-esteem; and once found our self-esteem, we are strong enough to realize ourselves. In other words, once realized animally, we can realize ourselves humanly.

A seemingly simple and logical sequence of priorities which we often forget. I always wondered what accounted for such a dramatic difference between people and people, race and race, nation and nation. There had to be some explanation as to why life in Spain was so much better than life in Mexico. First I thought that either race or education accounted for such differences, and I was not entirely wrong. Looking for a direct explanation, I found an unquestionable correlation between nationality and behavior, education and behavior. When I compared my experience in Mexico to that in Spain, I noticed that, generally speaking, Mexicans were obviously more corrupt and less educated than the Spanish. It was easy for me to think that the Latino race was more susceptible to corruption and dumbness than the Caucasian race. My theory, however, got challenged when it had to answer the question: If race has indeed to do with behavior, what accounts for the existence of polite, highly erudite Mexicans? But then: If race has nothing to do with behavior, why can we obviously associate certain behavioral patterns with certain racial groups? And: What explains that ancient “non-white” (or non typically considered as white) people such as the Chinese, the Maya, Egyptians, Sumerians, Incas, Aztecs, Arabs, or Hindus not only thrived, but were even much more developed than white people merely a few centuries ago, before white man imposed his own social and philosophical system upon the entire world, and, eventually, spread the plague of capitalism all over the globe?

Beyond education and race, there was another significant factor I missed: the indirect cause of money. In poor countries, where there is no money for education, the behavior of the vast majority will necessarily be less sophisticated than that of richer nations with a higher access to education. And since we tend to see countries as racially identical groups, it is fairly easy to conclude that certain races are simply worse than others. Instead, however, we should conclude that certain nations have less money than others, that is, certain people have less chance to become better than others.

Yes, there is a pattern: white communities are safer, finer, more educated, more reliable, and more successful than non-white ones. But the explanation is not a non-white inability. The explanation is that white communities simply have more money than non-white ones. In other words, although every single human being, regardless of race, is theoretically capable of reaching the same level of human sophistication, not every single human being is given the same opportunity to do so.

While in Spain, Japan, or Germany the satisfaction of almost every person’s most fundamental, basic, animal-material needs is guaranteed by law, people can afford to ponder over finer details of their existence. They don’t need to spend their time and energy on finding out what to eat, where to stay, how to protect themselves, and how to pay the bill. Safe and well fed, they have time, interest, and energy to consider the finest philosophical details of their life and humanity. They can make plans and commitments, they can formulate goals and a set of priorities that will indeed make them better people. In the meantime, most Mexicans or Venezuelans live like hunted animals: among empty shop shelves, oppressive dictators, corrupt governments, unleashed violence, jungle-rules, in search of food, shelter, safety, and basic survival. How could I possibly reach any of them, and start talking about the noblest ideals of existence, hearing their stomach rumbling, and seeing how all their nerves are focused on where to sleep tonight, how not to become victim of street violence, or where to get food for their child? How can I expect anyone to ask themself the finest questions of humanity and existence while their life is being threatened by war, extreme poverty, or homelessness? And how can I possibly expect such a person to behave well? To be delicate, sublime, graceful, minute, and refined? To be a good person? To be an exquisite human? All I can expect to see is a furious, blind, wild, brute animal, a simple material being without any moral or ethical consideration, trying to survive, and fighting for their most elemental existence from day to day.

But give them money and time to find the human within! You will see how the former animal slowly metamorphoses into a fine human concerned about appearances, minutiae, dainty nuances and fastidious details. They will develop a vision, formulate goals, and set up higher objectives. They will have time and energy to become a more elegant and better person.

There is a reason as to why Canadians are more understanding and humane than Iraqis, and why a trip to Japan is safer than one to Venezuela. But it is not due to education or race. Not because Iraqis are less educated than Canadians, and not because Venezuelans are biologically less capable than the Japanese. But simply because Canadians and the Japanese have more money for education, and a better opportunity to become better humans, better people.

Yes. Money does make one happier, fuller, and even more human. And yes: money makes us better. In fact, unless food and shelter is for free, we have to admit that money is the most fundamental requirement of moral rectitude and humanity.