When I say that the Church is dying, most religious people start fighting against my notion, and begin to prove that their Church is strong and eternal. They seem to defend their Church and religion at all costs, with the same blind irrationality as animals protect their young. Clearly, no rationale, proof, evidence, argumentation, or reasoning can persuade them at all. But why? Would God die if the Church died? Would the end of the Church and religion mean the end of God? Why do we need religions and institutional Churches so badly? Certainly not for God, but rather for ourselves. It is man whose God-notion is best expressed and manifested in institutions, formal norms, and socially shared ideologies. It is certainly not God who needs religions and Churches in order to communicate with man, for, if God needed these institutions, he would be limited to their existence. God, however, cannot be limited. 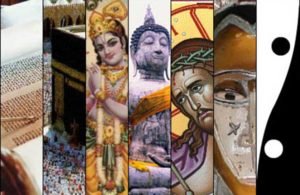 But if man’s and God’s communication and relationship is not limited to any Church or religion, why do we still believe the opposite, and consider that the only authentic communication between man and God can be realized through formal religions and institutional Churches? Why do we limit God’s nature to forms, norms, and insitutions, and even claim that it was God himself who established these forms, norms, and institutions in order for man to commune with him? Why do we put words into God’s mouth, and why do we attribute human politics to him? Why do we fight for our religions and Churches, and why can’t we just simply accept that any relationship between man and God can be reached and fulfilled merely spiritually, without institutional forms, and social norms?

Besides religions’ and religious communities’ cohesive psychological and societal power and effects, people often claim that it is not God, but man who needs religions. But is it a valid argument to claim that not God but man needs these forms, norms, and institutions? It can’t logically be: if these religious forms, norms, and institutions create a mistaken idea of God in the mind of man, their existence is not justified. If they helped man better relate to God, their existence would be justified, but since they unquestionably distort the understanding of the nature of God, they should not be defended and protected, but defied, destroyed, and annihilated. Religions and institutions represent an early, primeval human understanding of and approach to the divine. It is, therefore, time to take the next step, and leave our immature, childish, early-primitive understanding of God behind.

But you may be asking yourself: How would I live and express my faith without forms, norms, and institutions? The answer is frightening: you wouldn’t. But think about this: faith is not to be showed, proudly exhibited or shared with others. The nature of faith is intimate, and is reflected in your love towards and for others. If you were deprived of the external-institutional and social-public nature of faith, in other words, of organized religion, you would be forced to seek God in some other way. Since you could no longer turn towards the outside, objects, forms, and external aids, you would necessarily turn towards the inside, your innermost spiritual self and world, and you would identify and explain your relationship with God there. You would no longer claim to be religious, no longer would attend Masses and religious services, because you would understand that God is not outside, on altars, behind liturgical clothes, in smells and colors, but inside, and in your acts of love. You would no longer need to show others how religious you are, and what your religion is about. You would no longer need to boast about your faith, because you would understand that faith is your private relationship with God tht has nothing to boast about. You would find yourself close to God in your spirituality and acts of altruism, and you would find an inner peace in your soul. Deprived of external forms, norms, and institutions, you would realize that God is indeed as eternal and infinite as your soul, and you would also realized that through forms, norms, and institutions you were not only limiting God, but also deceiving yourself as far as God’s true nature is concerned. However, as long as you obsessively stick to external forms, norms, and institutions, you will never give yourself the opportunity to discover, understand, and experience God’s true nature. You force your thinking into religion, label your understanding with religion, and bias your perception through religion. Stop it, and do not be afraid of experimenting something new. In the worst case, you can always run back to your religious habits and community. It is not without reason, that religious flocks are notorious for showing a warm, affectionate welcoming and understanding towards repentant, home-coming prodigals.