Let us consider what exactly distinguishes man from the rest of the natural world. Without intending to collect all aspects, I will focus on the most obvious ones: certain phenomena similar to (biological) emotions (e.g. the ability to smile or cry), abstract thought (e.g. language, arts, religion, philosophical reasoning), self-awareness (e.g. altruism). 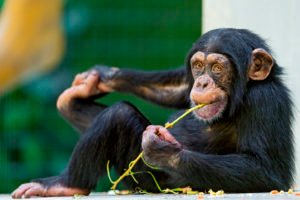 Let us consider that man is the most developed natural being. Now let us find the next most developed one down the line. The task is difficult, because criteria of intelligence and development vary, but most scientists would agree that among them would be chimpanzees, dolphins, or elephants. Now let us find the simplest animals, and compare them to the most developed plants. The line is around corals and sea anemones. Although they look like plants, they are animals. But now let us ask ourselves: Isn’t there an obvious, smooth transition between plants and animals? Can’t we clearly see how evolution brought the animal out of the plant? Isn’t the transition from plant to animal evident? Between the most sophisticated plant and the least sophisticated animal, there is a considerable biological difference. But we won’t find any considerable qualitative difference. Jumping back to the transition from animal to man, we can’t say the same. There is a smooth and unquestionable biological transition. But there is a not so smooth, and not so self-explanatory qualitative difference – with no trace of transition whatsoever!

Human attributes listed above appear in man without any biological explanation, or evolutionary preparation. There is a huge gap between man and the rest of the world that evolution does not explain.

This qualitative gap cannot be found between any other biological groups or families, which we need to explain. Even if we try to find the simplest human being, the least sophisticated human being – someone who, due to some illness, cannot communicate, cannot smile, cannot cry, cannot speak, write, or think in an abstract fashion, maybe even cannot think at all, someone who is seemingly a completely helpless, lying mass of flesh – we still are unable to equal such human being to a dolphin, a chimpanzee, or an elephant. We mysteriously feel that there is something unexplainable in this human being, there is an inherent humanness in them, that makes them qualitatively much more than any animal. We won’t sell this human being at a discounted price claiming that the product is defective, although, strictly biologically speaking, such human being is of less value than a healthy, self-sufficient chimpanzee. But there is this something else, this unexplainable humanness, this hard-to-grasp qualitative difference between man and animal, this mysterious gap for which no biology, no evolution, no nature accounts.

What is this gap? What makes man man?