What is God? What is man? I

I’d like to understand God. Not to understand who this well-known Christian God full of human characteristics is, or who that Eastern goddess, this Jewish Yahweh, or that Muslim Allah are – all equally designed, created, characterized, identified, and precisely described by their own cultures, times, politics, economic interests, literature, and other social trends. What I’d love to understand is the ideal, the concept, and the phenomenon that humanity refers to as God. The driving force of man’s biological need that invents, demands, requires, and so desperately necessitates the existence of a spiritual superiority. Of spiritual perfection. I’d like to understand why longing for perfection is such a universally, deeply and essentially carved species-specific trait in all humans regardless of cultures, age, politics, economic interests, and other characteristics. I’d truly love to understand something more certain of humanity’s real and only God: our wish for God. 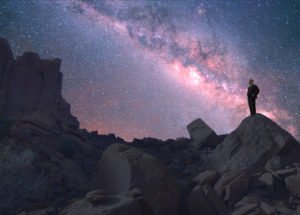 What is God like? Every major religion agrees that God is some kind of superior power, ability, might, limitlessness; a different dimension, maybe perfection, endless goodness, impeccable love. All God-definitions also agree that God is the creator of existence.

Let me focus on Christianity. The God-definition of the Christian Bible is quite specific: “God created mankind in his image; in the image of God he created them; male and female he created them.” (Genesis 1, 27) This means two things: that man is like God, and God is like man. In other words, the only power able to create, this single might behind our entire visible material life, and invisible, abstract concept (phenomenon) of existence, behind the complex, boundless time-space extension of the universes, breathed a spark of itself into man who, it follows, now carries a tiny light of God (existence) in himself. He is no longer a piece of self-moving, ambulatory flesh, but a fully conscious, aware and self-aware being: he conceives ideas, he has imagination, notions and desires, he craves, suspects, feels, remembers, knows, seeks, and transcends matter. Why is this so utterly extraordinary? Because our most basic human capabilities, our abilities that actually make us human, such as emotions, faith, hope, and love are not natural-material-evolutionary phenomena, but rather our divine attributes mirroring God’s very nature. The biblical notion about God creating man in his own image seems to be frighteningly true and justified. Man’s humanness in the midst of a dumb-dead-unconscious sea of matter is not so obvious after all.

The above is an excerpt from my book

Messages from Eden – The Autopsy of Existence