We (want to) believe that only what can be cognitively grasped exists. We cannot name one thing, idea, or phenomenon that could potentially exist without being materially cognized, for in the moment we cognize it, it is materially existing – at least in and by our material brains. Consequently, we come to the conclusion that for existence, material cognizance, or, matter, is needed. In other words, matter originates existence.

But how could matter exist without an independent existence that gives rise to it in the first place?

Does existence exist even without its material cognizance?

Is cognizance indeed only material, or are we simply closed in a material box called universe and ignore non-material ways of cognizance? 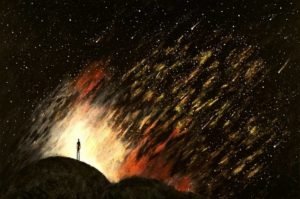 Everything is material. Existence is matter.

If we imagine a non-material God, since this notion could not have been formulated without our material cognizance, we must recognize that even our non-material God is a material brain-phenomenon. We would have never imagined (or realized) this non-material God should we have had no brain. Whatever we imagine, or whatever we speak or think about, it is necessarily material, because it is born in a material mind or imagination.

How could we find any proof that existence and cognizance can be non-material?

Only by logic, claiming that while matter is mortal, existence is eternal by nature. But I have two problems: (1) Why should existence be eternal? (2) Even my logic that made up this neat explanation is material.

Indeed, I have no proof that anything exists or can exist without and beyond matter. Matter, regardless of how inferior and perishable it is, cannot be excluded from any existential equation. We need to deal with it. But if we identify it with existence, and with the fullness of existence, as many do, and do so with a good reason, then we are better off by abandoning the idea of religion, morality, and spirituality, and start living every second of our one-only, material existence by the philosophy of “Carpe diem.” And this is rather depressing. There is no hope. There is nothing else but matter. What a miserable existence! What a blind senselessness! What a dead-end street! We are victims of the cosmos, of matter, of gases and carbons, molecules and atoms; of energy, and of a big cosmic accident that has no logic, no reason, no conscious design and willpower, no plan with us, no future or eternity for us. Our existence is a cosmic coincidence, and all we can do to explain the reason and purpose of our existence is to find out how matter began, originating existence. But even so, we will find no purpose, and this is the real tragedy of materialism: purposelessness.

Man is hardwired to have a purpose, to develop one, to find one, to create one, even to invent one if no other option is available. We are hardwired to find some conscious, rational purpose for every single phenomenon, act, decision, occurrence. We cannot accept the idea of purposelessness. We cannot live without having purposes. We know that without purpose, nothing makes any sense. But what to do with such innate human urge if existence itself has no purpose at all? If the entire world, the entire existence will just disappear at some point, eliminating every sense and effort of purpose? How can I find purpose in procreation if I know that a few generations down the road, the entire human race and matter and energy and universes and cosmoses and everything will simply cease to exist? Then what is the point of procreating? Are we procreating into nothingness? Into purposelessness? Cannot we eternalize literally anything from ourselves, from our existence, from our feelings, decisions, greatness, human pride, uniqueness, hopes, faiths, and achievements? Is indeed literally everything condemned to an ultimate, big, unavoidable failure? To a final big disappearance? To the annihilation of sense? To the complete decay of purpose and reason?

Where did existence, matter, existential nothingness, and the idea(l) of existence come from? What was there before the first spark of material existence? Nothing? Nothing is something if we cognize it. If we don’t, it is indeed nothing. But even something is nothing without being cognized. So the first cognizance must be the first moment of existence. Except that it can’t be, because we know that the first moment of existence wasn’t cognized. Yet we know that there existed a world even before anything or anyone cognized it, that is, existence and cognizance cannot be the same thing. Let us review this idea once again.

There are two ways to go:

(1) Existence is matter and it doesn’t require to be cognized in order to exist. Existence exists even if not cognized.

(2) Existence only exists if cognized, therefore, existence had been cognized even before material life emerged.

What explains our longing for purposefulness?

Let us ignore the aspect of cognizance of existence, and let us focus simply on the fact that existence is matter regardless of being cognized or not. We realize that our existence is our matter. But we soon run into a queer contradiction: We crave for purposefulness. The oddity of this statement is in the fact that “we” really means “matter.” Translated the same sentence accordingly: Matter craves for purposefulness. Which is just impossible. On one hand, matte cannot crave for anything, on the other, we have just seen that existence as matter and matter as existence is purposeless. Matter as existence and existence as matter does not have any purpose; it is built on accidentality.

What explains that matter (man) begins to seek purposefulness? Matter itself cannot explain it, because for that, matter should transcend itself which is impossible. Matter cannot transcend itself, and even if it does, then the outcome is no longer matter, but something else, something qualitatively and essentially different.